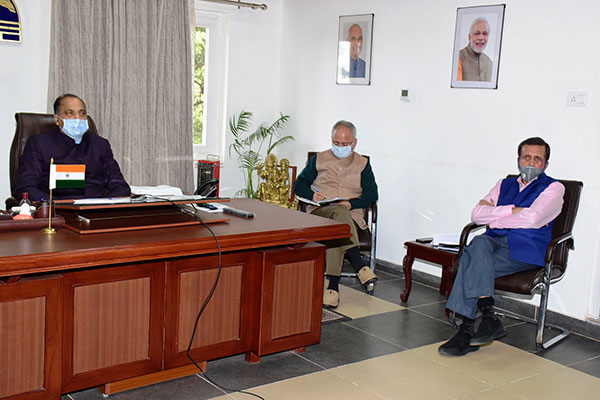 While holding video conferencing meeting in the wake of corona virus with all the Deputy Commissioners, Superintendents of Police and Chief Medical Officers of the State from Shimla today, Chief Minister Jai Ram Thakur said that a special campaign would be launched on the analogy of Active Case Finding Campaign to medically examine the people entering to Himachal Pradesh from other States and these persons would be kept in home quarantine.  He asked the officers that it should be ensured that they do not jump from home quarantine.

Jai Ram Thakur asked the officers to compile the data of such persons who have arrived in Himachal Pradesh from other States and if a person had come from red zone he must be kept in quarantine centre.

Chief Minister directed the officers to ensure strict compliance of guidelines of Union Ministry of Home Affairs and make elaborate arrangements to bring the people of Himachal Pradesh stranded in other States.  He said that State Government had already appointed adequate number of supporting officers to the Nodal Authority to coordinate movement of the migrant workers, pilgrims, tourists, students and other persons both within and outside the State.

He urged the representatives of PRIs and Urban Local Bodies to keep a close vigil on the persons who had returned from other States and persuade them to strictly follow the norms of home quarantine.  He said that Himachal Pradesh was in a comfortable position till now and it must be ensured that this situation is maintained at all costs.

Jai Ram Thakur said that efforts should be made to start economic activities particularly in the green zones. He said that special thrust must be laid on providing smooth movement of essential commodities and farming equipments. He said that people should also be motivated to wear face masks and face covers as this could check spread corona virus.

Chief Minister said that since selective shops were allowed to open in certain areas, but it must be ensured that effective social distancing is maintained there and everyone uses face masks and sanitizer.

Chief Secretary Anil Khachi assured the Chief Minister that officers would ensure that all directions of the State Government were implemented in true letter and spirit.