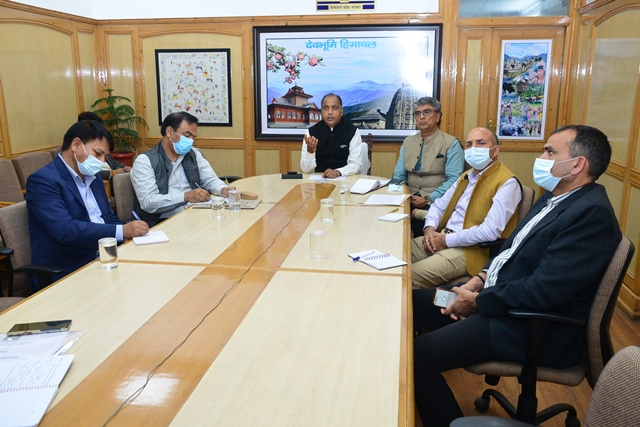 Himachal Pradesh has attained an unique distinction of achieving cent percent target of first dose of Covid-19 vaccination against Covid-19 above the age of 18 years for which Prime Minister Narendra Modi congratulated the State Government and has agreed to virtually address the people of the State on 6th of September and also interact with few frontline workers, who have done exceptional work in achieving this target . This was stated by Chief Minister Jai Ram Thakur while presiding over a video conferencing meeting with Deputy Commissioners, Superintendents of Police and Chief Medical Officers, Principals of Medical Colleges, Medical Superintendents, Sub Divisional Magistrates and Block Development Officers of the State from Shimla today.

Chief Minister said that as many as 90 LED screens would be installed at different parts of the State such as district, sub division and block development headquarters besides other prominent places so that people could participate in this mega event. He said that health workers would also interact with the Prime Minister and share their views regarding making this vaccination campaign a success.

Jai Ram Thakur said that all the Deputy Commissioners must launch special mop up round to vaccinate any left out persons. He said that special focus must be laid on identifying difficult pockets such as Bara Bhangal in Kangra district, Malana in Kullu district and Dodra Kwar in Shimla district so that any left out persons could be identified and vaccinated accordingly. He also directed the officers to identify a few doctors, para medical staff, ASHA workers or any other front line workers who have performed their duties in an exceptional way in difficult circumstances.

Chief Minister said that adequate arrangements should be made for sitting of general public at the venue where the event would be screened. He said that it must be ensured that people strictly adhere to the guidelines such as use of face masks and social distancing in these gatherings. He said that involvement of local MLA, vaccinated people and public representatives would also be ensured to make this event a success.

Jai Ram Thakur said that the State Government would provide vaccine to few left out people of Bara Bhangal area of Kangra district for which special sortie of State helicopter would be conducted.

Chief Secretary Ram Subhag Singh while welcoming the Chief Minister, directed the officers to ensure that all the left out people, if any, should be vaccinated by 4th of September by launching special campaign in this regard. He said that the State has also maintained target of zero wastage of vaccine which also needs to be highlighted.