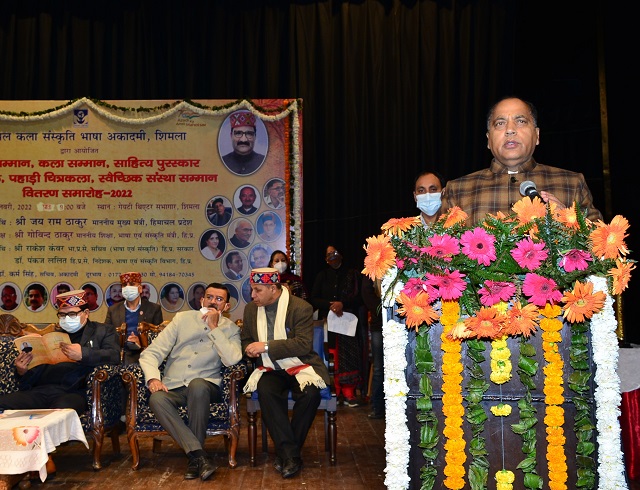 Jai Ram Thakur said that conferring of two Padma Shree Awards to septuagenarian Vidyanand Saraik and Lalita Vakil was great honour to the State. He said that Lalita Vakil has been working for the promotion of Chamba Rumal for the past about 50 years and this award was not just recognition for her but also for the traditional art of Chamba Rumal of Chamba district. Similarly, Vidyanand Saraik was a multifaceted personality who has been striving to conserve and revive hilly culture for long, he added.

Education and Language, Art and culture Minister Govind Singh Thakur presented Sardar Sobha Singh Lalit Kala Award for 2017 to Nand Lal Thakur and for 2018 to Khimi Ram for their excellent contributions in their respective fields. Jwala Prasad Sharma was awarded Manohar Singh Nishpadan Kala Samman 2016, Sanjay Sood for year 2017 and S.D. Kashyap was awarded this award for the year, 2018. They were awarded cash prize of Rs. 51,000 each and a citation.

Secretary Language Art and Culture Rakesh Kanwar, Director LAC Dr. Pankaj Lalit was also present on the occasion among others.