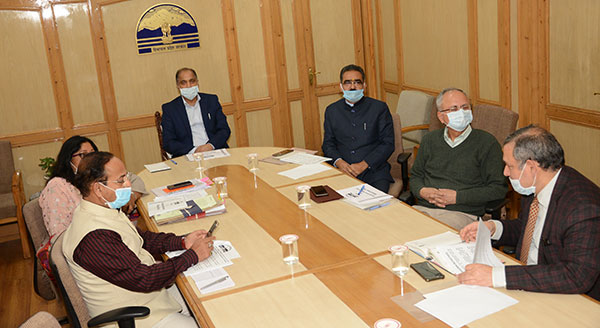 State Government is committed towards ensuring welfare of labourers and several initiatives have been taken to bring labour reforms in the State. This was stated by Chief Minister Jai Ram Thakur while presiding over the presentation on Labour Reforms made by Labour and Employment Department here today.

Chief Minister said that daily inspections were being carried out across the State by field functionaries of Labour and Employment Department as lockdown initiative, which were being monitored on day to day basis. He said that till date 1373 such inspections have been conducted to check any exploitation of labourers in the state. He said that more than 90 percent of the employers have paid wages/ salaries to their employees. He said that complaints regarding non-payment of wages to the workers were being viewed seriously.

Jai Ram Thakur said that financial assistance of Rupees Two thousand was being provided to the workers registered with H.P. Building and Other Construction Workers Welfare Board for the month of March and April, 2020. He said that first installment of Rs. 2000 was given to 1,02,368 registered workers, amounting to Rs. 20.47 crore transferred through DBT and second installment would be transferred in a day.

Chief Minister said that Deputy Labour Commissioner has been designated as Nodal Officer for COVID-19 to redress the grievances of stranded migrant labourers of other States working in the State as well as workers of Himachal Pradesh working in other States of the country. He said that all the labour officers have been appointed as Nodal Officers in their respective jurisdiction to assist and coordinate with the district administration.

Additional Chief Secretary Labour and Employment Nisha Singh made presentation on Labour Reforms on the occasion.