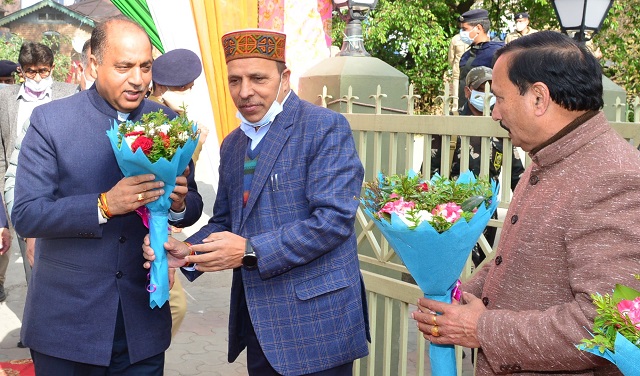 Chief Minister Jai Ram Thakur while presiding over the 18th Meeting of  Himachal Pradesh Gaddi Kalyan Board at Dharamshala today said that the State Police Department has been directed to take immediate steps to check theft of sheep and goats of the Gaddi community by taking strict action against the criminals.  He said that the State Police has issued Standard Operating Procedure (SOP) on this subject, according to which the responsibility of the police administration has been fixed so as to ensure safety of life and property of the community.

Chief Minister said that compensation should be provided without delay to the Gaddis on loss of their sheep or goats due to natural disaster or pandemic. He directed the concerned officers to ensure timely vaccination of the sheep and goats of Gaddis to protect their flock from various serious diseases. He also directed the concerned officers to separately examine the issues raised in the meeting regarding opening and upgradation of health and educational institutions in the tribal and hard areas. He directed the concerned department to ensure that no one transfer the grazing permit issued to them to other person as this would be viewed  seriously.

He said that the State Government has succeeded in receiving an amount of Rs 46 crore from the Ministry of Tribal Affairs, Government of India, for the development of tribal people living in non-tribal areas, during  the last three years, whereas only Rs 33 crore were sanctioned from the Center during the  previous government during its five-year tenure.  Apart from this, funds are also being made available from the state plans by the schemes of various departments, he added.

He said that an amount of Rs. 2.40 crore has been provided to Himachal Pradesh Handicrafts and Handloom Corporation during the last three years.  He also directed the departments to keep in mind the development and welfare of the Gaddi community while making their plans.  He also asked the Animal Husbandry Department to endeavour to improve the income of Gaddi community by providing latest scientific technology to them.

Minister of IT, Technical Education and Tribal Development Dr Ram Lal Markanda while welcoming the Chief Minister and other dignitaries present on the occasion said that the meeting of the Board was long pending due to the corona pandemic.

MLAs Vikram Jaryal and Jiya Lal Kapoor and all the non-official members also gave their valuable suggestions in the meeting.

Chairman Woolfed Trilok Kapoor said that due to the special benevolence of the Chief Minister Jai Ram Thakur,  HP Wool Federation have been strengthened and an  assistance amounting to Rs. 136.94 lakh has been provided in the last three years  to the Federation. He requested the Chief Minister for making separate provision of three percent in budget must be made for development of tribal people living in non-tribal areas.

Principal Secretary Tribal Development Onkar Sharma thanked the Chief Minister, Minister, non-official members and other people for sparing their time to attend the meeting  and giving their valuable suggestions on the occasion..