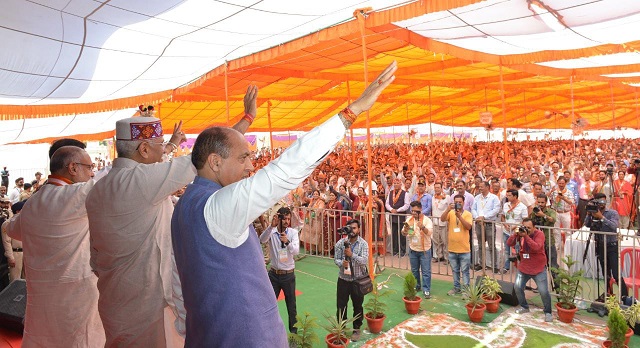 While addressing the ‘Tridev Sammelan’ organized at Jawahar Park, Sundernagar in Mandi district today, Chief Minister Jai Ram Thakur urged the party functionaries to work with greater commitment and dedication to ensure ‘Mission Repeat’ in the State, so that the pace of development goes uninterrupted.

Chief Minister thanked the Union Jal Shakti Minister Gajendra Singh Shekhawat for always being considerate towards the developmental demands of the hilly state like Himachal Pradesh. He said that the present tenure of the State Government remained dedicated towards the welfare and upliftment of the poor and downtrodden. He said that social security pension, Sahara Yojna, Grihini Suvidha Yojna, HIMCARE etc were proving boon to lakhs of people of the State. He said that over Rs. 1300 crore was being spent every year on providing social security pension to the needy, as compared to Rs 400 crore being spent during the Congress tenure. He said that over 20,000 families with chronically ill patients were being provided Rs 3000 per month under the Sahara yojna. He said that the motto of the present Government was ‘Jahan Gareeb, Wahan Sarkar’.

Jai Ram thakur also congratulated the people on the occasion of birth anniversary of Sant Kabir. He said that the teachings of Sant Kabir were far more relevant today, which shows his deep understanding of the society. He said that the BJP workers of Himachal Pradesh are known for dedication and commitment. He said that the State was fortunate that the son of the soil was heading the largest political party of the world. He said that it was only the BJP where a common party worker can rise to the topmost position in the party, whereas all the other political parties were headed by families. Government do not make organization, but it is the organization that makes the Government, he added

Chief Minister said that the BJP workers played a major and crucial role during the testing times of Corona pandemic. They not only distributed free masks and sanitizers, but also provided free food and shelters to the needy, he added. He said that on the other hand the State Congress leaders raised fake bills worth Rs 12 crore to its High Command, claiming that this amount was spent by them for providing PPE kits, ventilators, sanitizers etc. to the needy. What would have been the state of affair, had the Congress been in power during this testing times, he said.

Union Jal Shakti Minister also recalled the contributions of the senior BJP leaders of the State like Shanta Kumar, Prem Kumar Dhumal, Maheshwar Singh etc. for nurturing this party during its early stage. He said that it was due to their hard work that BJP has become the strongest and disciplined political party of the State. He said that in the last Lok Sabha elections, the State sent all the four BJP MP to the Parliament with a record margin to strengthen the hands of Prime Minister Narendra Modi.

Gajendra Singh Shekhawat said that as many as 10 crore bank accounts were opened at the time of launch of the Jan Dhan Yojna and today 45 crore bank accounts have been opened and proving boon to the beneficiaries of various schemes.  He said this feat was possible due to the able leadership of Prime Minister Narendra Modi, who has ensured that the country regains its lost pride and glory and every one can live with dignity and pride. He said that it was the Prime Minister who ensured that the weaker section of the society and those deprived of welfare benefits gets their dues. He said that several welfare schemes launched by the Prime Minister has proved a game changer for crores and crore people of the country. He said that India has been made open defecation free by the year 2019, however the target set by the UN was for 2030. He said that today India has emerged as a food surplus country and credit of this goes to the farmers and scientists, besides to strong political leadership provided by the Prime Minister Narendra Modi.

Union Jal Shakti Minister said that the world leaders were appreciating the steps and initiatives taken by the Prime Minister Narendra Modi during the Corona pandemic. He said that Prime Minister not only took effective steps to check the spread of this pandemic, but also developed its own vaccine. He said that it took 54 years for the country to develop vaccination of tetanus, similarly vaccination of hepatitis, rotavirus, polio etc. took years to reach India, but during the corona pandemic, when people of America were being vaccinated the people of Lahaul-Spiti were also being vaccinated at the same time. This was possible due to the strong and able leadership provided by the Prime Minister Narendra Modi, he added.

Gajendra Singh Shekhawat said that Jal Jeevan Mission has proved a boon to crores of women of rural and for people of water scarcity areas of the country. He said that despite the pandemic, all the targets were achieved well in time under this Mission. He said that Himachal Pradesh has also achieved the target of providing drinking water to 93 percent household. He said that Himachal Pradesh was continuously getting incentive for last two years for its excellent performance under this Mission. He assured the Chief Minister that paucity of funds would not come in way of achieving the targets under the JJM for the State.

Later, the Union Jal Shakti Minister and Chief Minister dedicated Rs 23 crore improvement of Lift Drinking water supply scheme for Sundernagar town. This scheme would go a long way in solving the water crisis of 11 wards of Sundernagar town and benefit about 21 thousand people of the town by providing them 24 hour water supply.

BJP State In-charge Avinash Rai Khanna said that the double engine governments at the Centre and the State has ensured that the pace of development goes uninterrupted. He said that the motto of the State Government was to provide benefits of the developmental scheme to a person living at the lowest ebb. Several schemes has been initiated by the Centre Government for welfare of the poor and downtrodden and the State Government has also started several schemes to cover those people who have not been covered under these schemes and this was the example of double engine government, he added. He also urged the BJP workers to sensitize the people about the various developmental schemes of the State and Centre Governments.

Member of Parliament and State BJP President Suresh Kashyap while welcoming the Union Minister, Chief Minister and other dignitaries present on the occasion, said that Himachal Pradesh BJP has pioneered in organizing ‘Tridev Sammelan’ in the country. He said that even the National BJP President Jagat Prakash Nadda has appreciated this initiative of the State BJP. He said that a mega event to celebrate eight years of the NDA in office was celebrated recently at Shimla which was graced by the Prime Minister Narendra Modi, which shows the benevolence of the Prime Minister towards the State and its people.