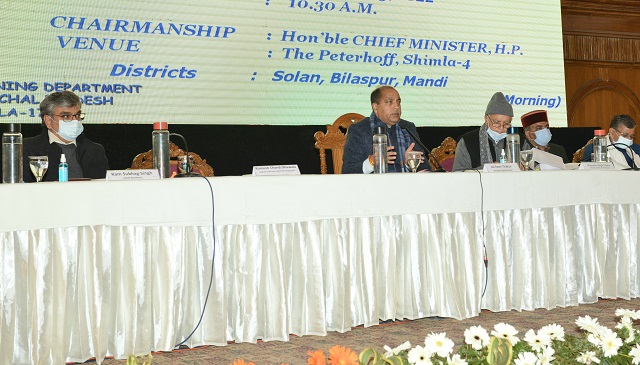 While presiding over the meeting with the MLAs for finalization of priorities for the Budget 2022-23 with the MLAs of Solan, Bilaspur and Mandi districts in the morning session here today, Chief Minister Jai Ram Thakur said that due to the effective financial management and resource allocation of the State Government, an outlay of Rs.12,638 crore has been proposed for Financial Developmental Budget-2022-23.

Jai Ram Thakur said that under the Jal Jeevan Mission, a program sponsored by the Central Government, 8.23 lakh households have been provided tap water facility in the State and target has been fixed to achieve the target to cover  all the households by mid of this year.

Jai Ram Thakur said that the provision of budget outlay has been made for repair and maintenance in all the DPRs under NABARD from 1st April, 2021. He said that NABARD has so far sanctioned 186 projects worth Rs. 965.41 crore under various MLA priority schemes for the year 2021-22.  He said that out of the projects of Rs.965.41 crore sanctioned by NABARD during the current financial year, projects worth Rs.465.05 crore have been approved for construction of roads and bridges and Rs.500.36 crore have been sanctioned for minor irrigation and drinking water schemes.  He said that provision of total annual plan outlay of Rs.18,500 crore was made during the first four years (2013-14 to 2016-17) tenure of  the previous State Government, as compared to Rs 34,474 crore made during the first four years of the present tenure of the State Government during the period 2018-19 to 2021-22.

Jal Shakti Minister Mahender Singh Thakur said that Jal Jeevan Mission has proved a boon to the people of the country and the State. He said that every household in the State would be provided tapped water under this Mission by July, 2022.

MLA Nalagarh Lakhvinder Rana expressed concern over the delay in preparing of DPRs of various developmental projects. He said that more funds must be provided under the Mukhya Mantri Gram Path Yojna to cover more roads in his area. He also urged to ensure proper maintenance of roads particularly in area having cement factories. He said that the condition of 80 per cent employment in all industrial units must be followed strictly.

MLA Solan Col. (Dr.) Dhani Ram Shandil said work must be expedited  on several roads  in the constituency. He also urged to construct adequate parking in Solan town to facilitate the people of the town. He said that Police Station Sairi must be made functional at the earliest. He also urged to strengthen the Sabzi Mandi at waknaghat to facilitate the farmers of the area.

MLA Naina Deviji Ram Lal Thakur thanked the Chief Minister for providing various drinking water supply schemes for the area. He said that adequate provision of irrigation must be made in this constituency to facilitate the farmers of the area. He also felt the need to provide adequate funds for various water supply schemes of the area, particularly in Jamli village,  Damighati schemes etc. He also urged for channelization of Ali Khad and providing specialist doctors in health institutions in his constituency.

MLA Karsog Hira Lal thanked the Chief Minister for giving special thrust on development of Karsog area during the last four years. He also urged to provide adequate funds for construction of ghats at Tattapani so that it could be developed from tourism point of view. He also felt the need for speedy FCA clearances of various projects so that they could be taken in hand soon. He also urged to provide specialists in Karsog Hospital to facilitate the people of the area. He said that the area should be developed from religious tourism point of view.

MLA Nachan Vinod Kumar said that the last four years have witnessed to alround development of Nachan area. He said that steps must be taken to develop the area from tourism point of view. He said that a tourism Information Centre must be opened in the area and adequate parking should be provided at Chail Chowk to facilitate the commuters. He said that better sewerage facilities must be provided in rural areas of constituency.

MLA Drang Jawahar Thakur said that a Division of Jal Shakti Vibhag must be opened at Thallout and asked to fill vacant posts on priority. He said that ITI and Atal Adarsh Vidhalaya must be opened in the constituency. He said that Nagwain and Barot Community Health Centers must be provided 108 ambulances. He said that all the old machineries of PWD should be replaced with new machineries. He also urged to open Inspection Hut of Jal Shakti at Jawalapur. He also suggested to allow mining of cut-stones to the farmers as this would help in strengthening their economy.

MLA Jogindernagar Prakash Rana thanked the Chief Minister for giving Jal Shakti division at Chauntra and ITI at Ladbhadol. He said that announcement of Police Chowki Ladbhadol to Police station was still pending and urged for fulfilling this announcement at the earliest. He said that work on major developmental projects must be expedited. He said that special thrust must be laid on completion of those projects which were nearing completion. He also urged the Chief Minister to fill up vacant post of different departments in the constituency.

MLA Mandi Anil Sharma said that being hilly state all the roads get damaged due to non-availability of proper drainage system. He said that roads must be maintained properly and College building must be completed in stipulated time period. He said that work on  Mandi by-pass  must be expedited to ensure smooth plying of vehicles in the town. He also urged the Chief Minister to renovate various temples in Mandi town.

MLA Balh Inder Singh Gandhi thanked the Chief Minister for providing Rs 115 crore for construction of roads and bridges during the period. He said that adequate funds must be provided for construction of mini secretariat at Balh. He also urged for channelization of Suketi khud to provide much needed relief to the farmers of the area. He also urged to provide solid waste management plant at Balh.

MLA Sarkhaghat Col. Inder Singh said that roads in the area must be maintained properly. He said that proper distribution of drinking water must also be ensured and specialist doctors must be provided in Sarkaghat Hospital. He said that funds must also be provided for renovation of Senior Secondary School Gehra. He also urged the Chief Minister to replace old machinery from the inventory of the PWD so that new machinery could be purchased.

Additional Chief Secretary Finance Prabodh Saxena, while welcoming the Chief Minister and other dignitaries present on the occasion, urged the MLAs to give their valuable suggestions so that they could be included in the budget. He said that after the last MLA priority meeting held last year, till date, 205 DPRs have been prepared by various departments and have been sent to the Planning department.