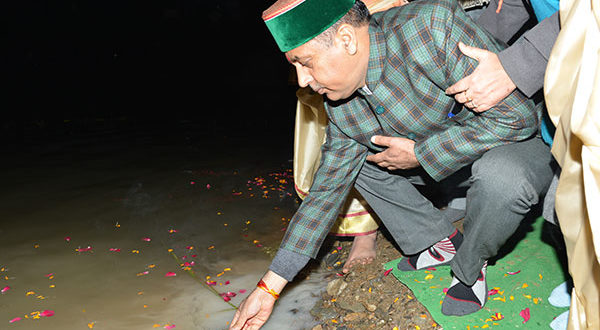 Modern cafeteria and e-toilets facilities to be provided at Tattapani

Chief Minister Jai Ram Thakur, while addressing a largely attended gathering on the occasion of Tattapani Tourism Festival and District Level Makar Sakranti Mela at Tattapani in Karsog area of Mandi district today on the auspicious occasion of Makar Sakranti, said that a modern cafeteria would be opened and      e-toilets facility would be provided in Tattapani by spending an amount of Rs. 3.50 crore to facilitate the tourists visiting this place.

Jai Ram Thakur said that Rs. 25 crore Lift Water Supply Scheme would be completed within next two years for which foundation stone was laid today and would solve the water problem of over eleven panchayats of the area. He said that keeping in view the rich history of Tattapani, the Government would develop it as a major centre of water sports. He said that efforts would be made to develop Tattapani as a major tourist destination so that the tourists visiting Shimla were also motivated to visit Tattapani.

Chief Minister said that today Tattapani has made a history as the Tourism Department prepared 1995 Kg. Khichadi in one utensil which has been entered into Guinness World Records. He said that the State Government would honour the Chefs who cooked this world record dish.

He said that apart from having immense tourism potential, Tattapani was also a major religious destination, attracting thousands of religious tourists from all over the country. He said that the BJP had set a record in itself by maintaining lead in all 68 Assembly Constituencies of the State in recent Lok Sabha general elections. He said that the vote share of BJP was highest in the Country and the highest victory margin in term of vote percentage was also of BJP MP Kishan Kapoor from Kangra Parliamentary seat. He said that the credit of this goes to the Prime Minister Narendra Modi and people of the State for their wholehearted support.

Chief Minister said that comments of Congress leaders regarding his participation in ‘Nati’ shows the disrespect of these leaders towards rich culture of the State. Chief Minister, while making a jibe at the leaders of Congress Party regarding his respect for rich cultural diversity and love for culture of the State, said that his ‘Nati’ would go uninterrupted not only during the next three years but for another five years as well.

Chief Minister said that abrogation of Article 370 has ensured that India has ‘One Flag, One Constitution and One Nation’. He said that the decision of the Honourable Supreme Court regarding Sri Ram Temple has also paved the way for construction of a magnificent Ram Temple at Ayodhya. He said that this decision was welcomed by one and all. He said that Jan Manch programme of the State Government has ensured that public grievances were redressed on the spot nearer to their homes. Going a step forward, now the State Government has started Mukhiyamantri Sewa Sankalp Yojna 1100 for redressal of public grievances at the earliest. 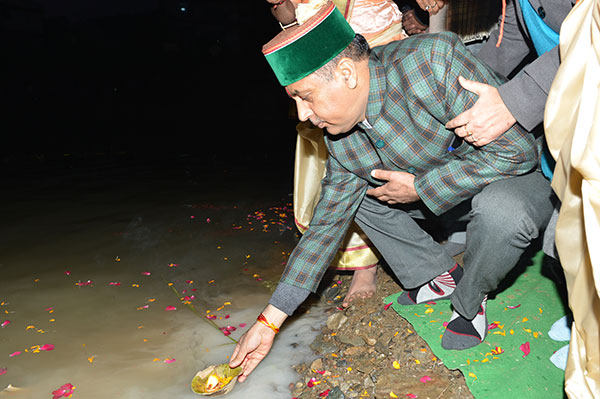 Jai Ram Thakur said that Citizen Amendment Act was a historic step taken by the Union Government and people of the State support this decision as this would help in providing citizenship to the minorities coming from Pakistan, Bangladesh and Afghanistan due to discrimination in these countries. He said that the Act is only for migrants from Hindu, Sikh, Buddhist, Jain, Parsi or Christian communities from Afghanistan, Pakistan or Bangladesh who has fled these countries due to atrocities there. He said that the Act seeks to grant immunity to the migrant of the aforesaid Hindu, Sikh, Buddhist, Jain, Parsi and Christian communities so that any proceedings against them regarding their status of migration or citizenship do not bar them from applying for Indian citizenship.

Chief Minister announced opening of Health Sub Centre at Sartala and Rs. 15 lakh for construction and maintenance of different roads in Tattapani area. He announced improvement of black spots from Tattapani-Churag road and also announced construction of helipad at Tattapani provided land was made available for the same.

Jai Ram Thakur announced adequate funds for maintenance of Chaba foot bridge and for construction of building of Government Secondary School Kheel. He also announced Rs. 10 lakh for development and beautification of Shakra village and Rs. 10 lakh each for three scheduled castes concentrated villages of the area.

Later in the evening, the Chief Minister inaugurated Tattapani Tourism Festival and  participated in the Satluj Aarti. As many as 3000 “Diyas” were lit on the occasion.

Member of Parliament Mandi Parliamentary Constituency Ram Swaroop Sharma said that Tattapani was a historic place and has immense potential from water sports point of view. He also thanked the Chief Minister for starting Electric Bus Service from Tattapani to Shimla which would go a long way in facilitating the tourists visiting this place.

MLA Karsog Hira Lal while welcoming the Chief Minister to his home constituency said that that the area has witnessed unprecedented development under that able leadership of Chief Minister Jai Ram Thakur. He said that the two years tenure of the State Government has witnessed spectacular and unparalleled progress in different spheres of the development. He said that about 2.65 lakh free gas connections were provided in the State to make Himachal a first State in the country where every household has gas connection thereby becoming first smoke-free State in the country . He also thanked the Chief Minister for laying foundation stone of Rs. 25 crore lift water supply scheme for the area and detailed various developmental demands of the area.

Director Tourism and Civil Aviation Yunus, while welcoming the Chief Minister, said that the Department of Tourism was poised to make Tattapani as a major tourist destination.