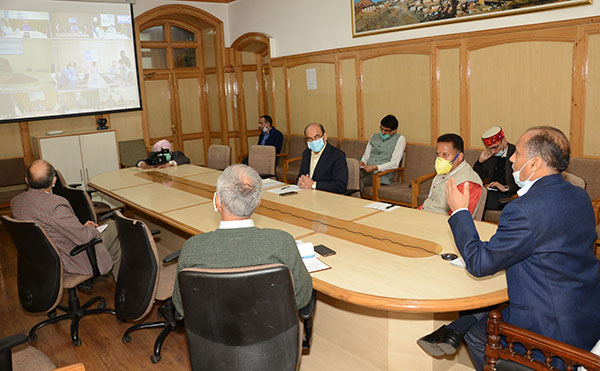 The State Government would launch new programme ‘Nigah’ to properly sensitize and educate the family members of the people of the State coming from other States of the country, so that social distancing is effectively maintained. This was stated by the Chief Minister Jai Ram Thakur while presiding over the video conference meeting with the Deputy Commissioners, Superintending of Police and Chief Medical Officers from Shimla today.

Chief Minister said that since thousands of people of Himachal Pradesh are stranded in various parts of the country, it has become necessary that any person reaching his home was properly checked medically and his case history is recorded. He said that a team of ASHA workers, health workers and Anganwadi workers would visit the family members of persons arriving from other States to sensitize and educate them regarding importance of social distancing so that they could be saved from any possible infection.

Jai Ram Thakur said that passes must be issued in a staggered manner to the persons who intend to come back to their native place from other States, so that un-necessary crowding at entry points could be averted. He said that this would also help the district administration in making adequate arrangements for keeping check on such persons besides effectively maintaining quarantine facilities.  He said that the persons entering the State have been asked to download Aarogya Setu App and must also be provided with Information Education Communication (IEC) material regarding importance of social distancing.

Chief Minister said that houses of such persons who had come to state from other states must be properly marked. He said that representatives of Panchayati Raj Institutions and Urban Local Bodies must ensure that such persons do not jump from home quarantine. He said that they should also motivate the family members to ensure that even within the family the person maintains social distancing. He said that special care must be taken of old, chronically ill persons and children.

Jai Ram Thakur said that the ‘Himachal Model’ for containing the spread of COVID-19 pandemic was being appreciated throughout the country as state has effectively succeeded in checking this pandemic. He said that strict action would be taken against those jumping home quarantine as this would not only harm their family members but also society as a whole.

Chief Minister said that State Government was committed for safety of people of the state within the state as well as those stranded in other parts of the country. He said that elaborate arrangements were being made to bring all the stranded people to their native places by the Government, but at the same time it is also the responsibility of the people to cooperate with the Government to follow protocol laid down to check this pandemic.

Chief Secretary Anil Khachi said that migrant labourers should be motivated to stay back by providing works so that developmental works as well as agricultural activities do not suffer.