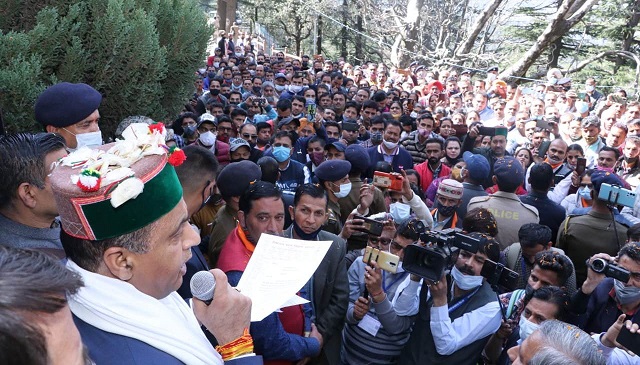 The State Government would soon start batchwise recruitment of vacant posts of JBT in the educational institutions to ensure ample employment opportunities to the trained JBT youth of the State.  This was stated by the Chief Minister Jai Ram Thakur while addressing the delegation of Himachal Pradesh Shikshak Mahasangh in Vidhan Sabha complex here today.

Chief Minister said that the Education department was probably the largest department employing maximum number of employees. He said that the State Government has made several announcements in the budget for the year 2022-23 to facilitate every category of teachers. He said that it has been announced in the budget that designation of B.Ed and TET qualified and eligible Shastri and Language Teachers would be changed to TGT (Sanskrit) and TGT (Hindi). Similarly, Lecturer (School Cadre) and Lecturer (School New) would be designated as Lecturer (School), he added.

Jai Ram Thakur said that it has also been announced in the budget for the next financial year that one time option for promotion as Headmaster would be given to promoted lecturer from TGTs. He said that a provision of Rs. 8,412 crore has been made for the Education sector during the year 2022-23.

Chief Minister said that all the genuine demands of the teachers would be considered sympathetically. He said that despite the pandemic not even a single day delay was made in the salary of the employees.

Education Minister Govind Singh Thakur and other office bearers of the Mahasangh were also present on the occasion.