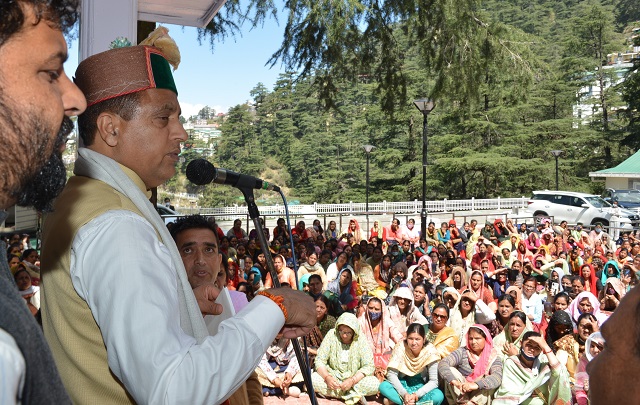 A committee would be constituted to look in to the matter of re-designating the Silai Adhiyapika (Tailoring Teachers) and to frame a policy for regularizing of their services. This was stated by the Chief Minister Jai Ram Thakur while addressing the delegation of Silai-Kataye Adhiyapika that called on the Chief Minister at Oak Over here today to thank him for increasing their honorarium by Rs. 900 per month. The delegation was led by the President of Bharatiya Mazdoor Sangh Madan Rana.

Chief Minister said that the present State Government was committed for the welfare of the employees, particularly the para-workers employees in various departments. He said that the State Government would also ensure that 20 per cent of the seats of Panchayat Secretaries be filled amongst the Silai Teachers, for which notification would be issued soon.

Jai Ram Thakur said that the Government was also ensuring women empowerment at all levels. He said that Mukhyamantri Grihini Suvidha Yojna, Beti Hai Anmol, Shagun Yojna etc. were aimed at this direction. He said that for the first time Gender Budgeting Component has been introduced in the budget for the financial year 2022-23. He said that honorarium of Asha Workers, Anganwari Workers, and mid day meal workers have been increased considerably in the budget 2022-23.