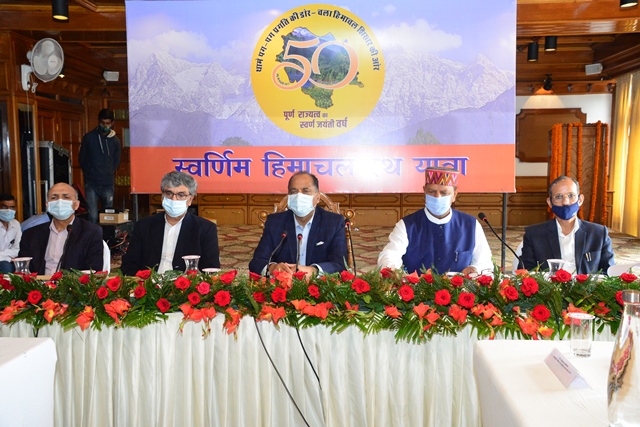 Jai Ram Thakur said that the State Government has constituted an Executive Committee under the chairmanship of MLA Dr Rajiv Bindal for successful organization of this event. He said that not only this, further four sub committees have been constituted which include Swarnim Rath Procurement Committee, IEC Committee, Social Media Committee and Budgetary Committee. He said the State Government was contemplating to organize the Swarnim Himachal Rath Yatra in the State from 25th January this year but due to the pandemic it was postponed.

Chief Minister said that the proposed Swaranim Rath would cover different parts of the State and 51 events would be held in a befitting manner. He said that the developmental history of the State would be showcased in this Rath Yatra and the participation of general public would be ensured. He said that active participation of achievers in different fields such as sports, social work, culture, literature etc would also be ensured in this Swarnim Himachal Rath Yatra.

Jai Ram Thakur said the Swarnim Rath would be equipped with latest equipment for live audio-visual coverage on developmental history of the State. He said that all the leading and major departments such as Education, Social Justice and Empowerment, PWD, Jal Shakti, Rural Development, Forests and Power etc. would also showcase the development witnessed during these fifty glorious years.

Chief Minister said the main objective of this Swarnim Himachal Rath Yatra was to instill the sense of pride in the hearts of every Himachali about the splendid progress the State has made during these fifty years. He said that every one must get a feeling that he or she has been part of this glorious journey and have contributed in the development of the State. He also directed the officers to prepare quality publicity literature highlighting the development the State has witnessed during all these years.

Jai Ram Thakur directed the district administration to form a committee to finalize route plan and other interactive details pertaining to Rath Yatra. All elected representatives PRIs/ULB, Yuvak Mandals, Mahila Mandals, SHGs were to be invited and involved for making this Rath Yatra successful.

MLA and Chairman Executive Committee Dr Rajiv Bindal suggested that different themes for various districts could also be considered while celebrating the event in that particular district.

Chairman State Finance Commission and Chairman Budgetary Committee Satpal Satti said that efforts must also be made to decorate major historic and important buildings where the Swarnim Rath arrives and major event would to be held.

Political Advisor to the Chief Minister and Chairman Swarnim Rath Yatra Procurement Committee Trilok Jamwal said that steps must to taken to associate every household with this mega event so that the people gets a feeling of belongingness.

Chief Secretary Ram Subhag Singh while welcoming the Chief Minister said that all the Departments would work in close coordination to make this event memorable one.