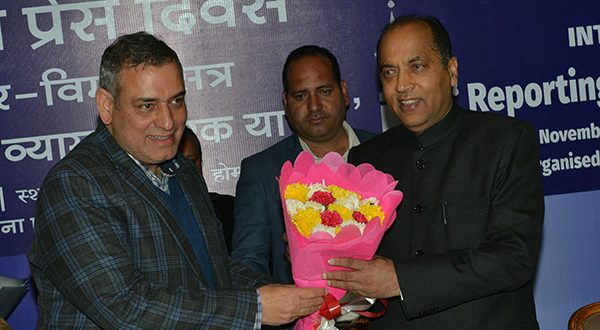 There is no shortcut for hard work and dedication:CM

Free press was a cornerstone and essence of a strong and vibrant democracy and freedom of press should be maintained at any cost. Chief Minister Jai Ram Thakur said this while addressing the State Level function held on the occasion of National Press Day. While congratulating the journalists on the National Press Day, Chief Minister said that there was no shortcut for hard work and dedication be it journalism or any other profession, we should give our best to excel in the profession.

Chief Minister said that media people should always maintain high standard of professionalism and set an example for the others. He said that media should criticise but should guard against ‘fake news’ and desist from disinformation and misinformation. There are ethics of every profession and it should be upheld, he added.

Chief Minister said that the advancement in technology has changed the media scenario of the world. He said that media help the masses to get information about a lot of things and also form opinions and make a judgment regarding various issues. It is the media, which keep people updated and informed about what is happening around them and the world and everyone draws something from media, he added.

Jai Ram Thakur said that media affects people’s perspective and is also considered as ‘watchdog’ of political democracy. He said that in today’s world, media is the most powerful entity.

An interactive session on ‘Reporting-Interpretation: A Journey’ was organised by the Department of Information and Public Relations here on Saturday on the occasion of National Press Day. 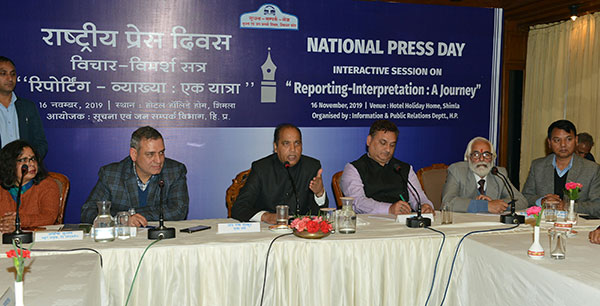 Earlier, while addressing the media persons during interactive session, Editor of Amar Ujala newspaper Rakesh Bhatt said that fake news was more damaging than the paid news therefore it was responsibility of the journalists to bring out the truth based on facts. He stressed on training of the young journalists so that they could be made aware about changing trends in the media. He also emphasised on positive, inspiring and developmental reporting.

Veteran journalist and special correspondent of Uttam Hindu P.C. Lohumi, said that special focus should be on truth and facts while reporting. Due to hyper-localisation the sequence of questioning has stopped and what was relevant was not being covered and reported. He added that as a result of technological advancement, the reader and viewer had become more aware and has multiple options such as newspapers, television channels and social media to get news.

While expressing her views, Bureau Chief of The Statesman newspaper Archna Phull said that the event was an opportunity to introspect the journey of media and media plays an important role in building society. She emphasized on veracity of news based upon factual reporting. She said journalist should be corroborative and must verify the information received before disbursing it. She also stressed on individual credibility of the journalists.