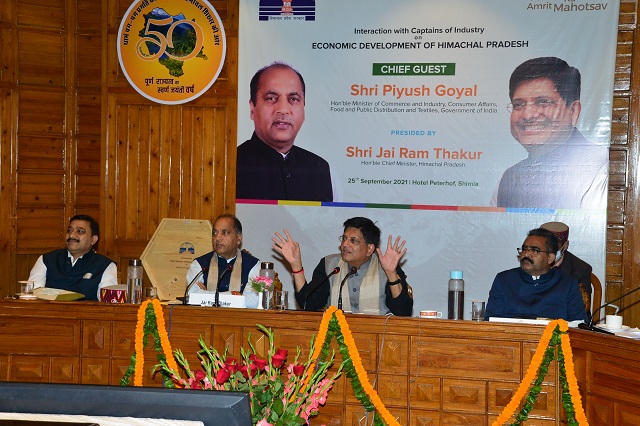 Union Commerce and Industries Minister Piyush Goyal while addressing an interaction session with the stakeholders/investors/captains of industry on Economic Development of Himachal Pradesh here today, said that this week was being celebrated as Vanijya Saptah from 20 to 26 September to celebrate the India’s rising economic force across the country. He appreciated the steps taken by the State Government to make Himachal Pradesh as an investor’s paradise.

Chief Minister Jai Ram Thakur said that the Himachal Pradesh offers investor friendly ecosystem and healthy industrial relations with the investors. He said that Himachal was amongst the leading States of the country in Ease of Doing Business and the State Government was poised to make it as an Investment Hub of the country.

Jai Ram Thakur said that the State Government organized Global Investors Meet on 7 and 8 November, 2019 at Dharamshala in which as many as 703 MoUs worth Rs. 96000 crore were signed. He said that going a step forward, the State Government performed first ground breaking ceremony within two months of the Meet of projects worth about Rs. 13,500 crore.

Additional Chief Secretary, Industries R.D. Dhiman, while welcoming the Chief Minister, Union Minister and other dignitaries present on the occasion, detailed various initiatives taken by the State Government to attract investments in the State.

They appreciated the best investors environment and ease of doing business initiatives provided by the State Government to facilitate the investors. They also thanked the Union Government for sanctioning Medical Devices Park for the State. The entrepreneurs felt the need of strengthening of infrastructure in industrial areas in the State. They also suggested setting up of API Monitoring Cell in the State.

Several exporters of the State virtually interacted with the Union Minister and shared their views in the meeting.