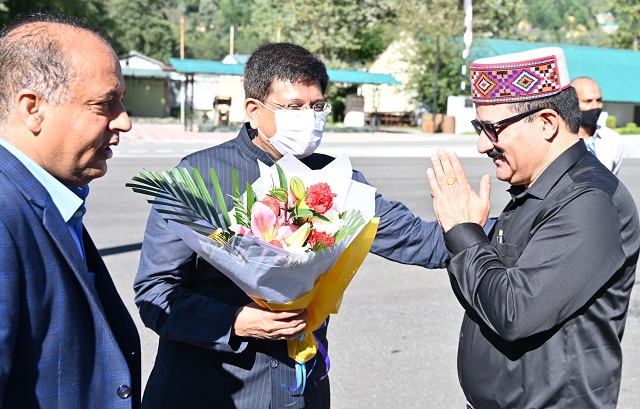 A Weaver Services and Design Resource Center will be set up in Kullu to encourage attractive handicraft products of the state besides providing a better platform for export of these products in the international market.

Union Minister of Commerce and Industry and Textiles Piyush Goyal made this announcement during an interaction programme with handicrafts and handloom artisans under Seva and Samarpan campaign on the occasion of golden jubilee of the statehood of Himachal Pradesh at Kullu today. Chief Minister Jai Ram Thakur presided over the function.

Piyush Goyal said that Himachal Pradesh had immense potential for handicrafts and skill up-gradation of artisans, modern equipments and training would be imparted to prepare qualitative new designs in the Weavers Service Center. He said that more attention was needed to modernize the design, quality, packaging and marketing so that the weavers get better price for their products in the international market.

The Union Minister suggested to organize district-wise exhibitions of these products in big cities, people associated with the textile industry and five star hotels so that their branding could be done at national and international level. He asked the weavers to get their trademark for which the central government had reduced the registration fee by 80 percent.

He also interacted with the entrepreneurs of the district and distributed woodcraft, handloom, embroidery machines and certificates to the local handicraft and handloom artisans.

Chief Minister Jai Ram Thakur said that necessary steps had been taken to encourage the artisans of the state. At present, there are 13572 registered weavers in the state whose livelihood was related to the skill of weaving and embroidery. The handkerchief of Chamba along-with Kullu shawl and cap and the shawl of Kinnaur had been given G.I. Tags. In order to facilitate online sales platform for weavers, MoU had been signed with Flipkart and department was also doing online sale of products.

Jai Ram Thakur said that there had been a big change in the design and quality of handicrafts and handloom products in the state in the last 50 years and thousands of families had made it a means of livelihood. He said that Kullu districts handicraft especially caps and shawls were recognized internationally. When any head of state comes to India, Prime Minister welcomes him with a kullavi cap and muffler which was a matter of pride for the state. He urged the weavers to preserve the traditional clothes as they were associated with our culture as well.

The Chief Minister said that the tourism sector had been badly affected during the crisis of Covid and the handloom sector was no exception affecting thousands craftsmen. He said that better Covid management was done in the state and it was ensured that there was no shortage of oxygen and beds to the patients. He thanked the central government for increasing the supply of oxygen to 45 metric tonnes.

He said that Himachal became the first state in the country to provide the first dose of corona to cent-percent eligible population and the second dose had also been administered to 47 percent people and by the end of November, Himachal would also become the first state to give both doses to hundred percent population. 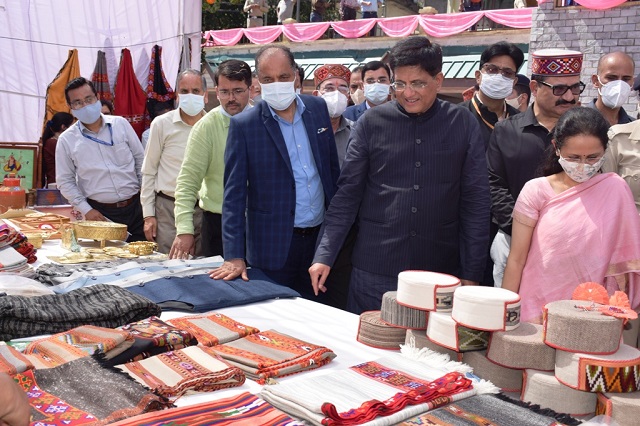 The Chif Minister thanked the Union Minister for fulfilling the demand of the state of Weaver Service and Design Resource Center.

The Union Minister and the Chief Minister visited the exhibition put up by the weavers. A small documentary on handloom and handicrafts was also shown on this occasion.

Education, Art, Language and Culture Minister Govind Singh Thakur said that Himachal Pradesh was emerging as a model of development under the leadership of Chief Minister Jai Ram Thakur. He said that Kullu district was today recognized internationally by its beauty, rich culture and handicrafts.

Managing Director of Handicrafts and Handloom Corporation Kumud Singh informed about the handicrafts of the state.

Vice President of Handloom and Handicrafts Corporation Sanjeev Katwal proposed the vote of thanks.