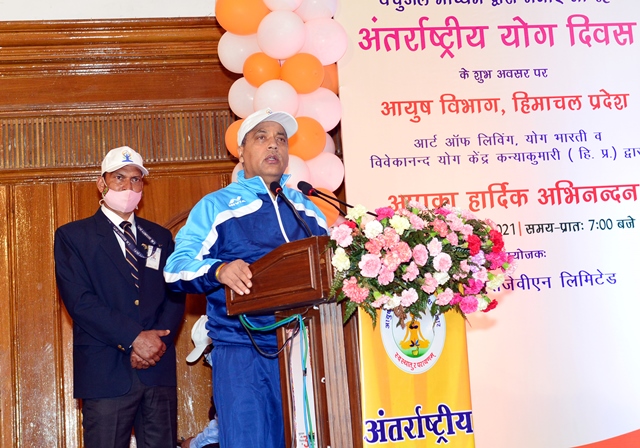 Yoga not only keeps human physically and mentally fit but also go a long way in maintaining balance between body and soul. This was stated by Chief Minister Jai Ram Thakur while addressing the virtual celebration of International Yoga Day-2021 organized by the Ayush Vibhag Himachal Pradesh at Peterhof here today.

Chief Minister said that International Day of Yoga-2021, was being observed with the theme ‘Yoga for well-being’, was much relevant in the prevalent times of corona pandemic. He said that Covid-19 pandemic was not just a physical crisis but also left lasting impacts on mental health. It has left many people in psychological suffering, depression, anxiety and to deal with the pandemic-necessitated restrictions. He said that Yoga can help people dealing with such crises, the United Nations explained on its website since the message of the practice is to promote both physical and mental health.

Jai Ram Thakur said that the idea for an UN-mandated International Day of Yoga was first proposed by Prime Minister Narendra Modi during his speech at the United Nations General Assembly in 2014. Prime Minister Modi called Yoga an “invaluable gift of India’s ancient tradition” and called for the “harmony between man and nature” through Yoga and this initiative was backed by as many as 177 nations, the highest number of co-sponsors ever for any UN Resolution of such nature, he added. 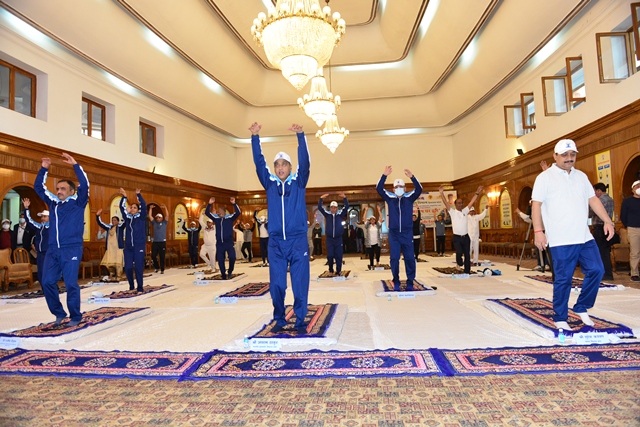 Chief Minister said that the State Government was committed to promote Yoga in the State. He said that with the active cooperation of Art of Living, Yog Bharati, Vivekanand Yog Kendra etc., the State Ayush Department has launched a new programme ‘Ayush Ghar Dwar’ from 14th May this year to virtually help the corona patients and other people for doing yoga and pranayam.

Jai Ram Thakur thanked Founder of Art of Living Shri Shri Ravi Shankar for sparing his valuable time by joining virtually to motivate the people by his enlightening thoughts.

Health Minister Dr. Rajiv Saizal while welcoming the Chief Minister and other dignitaries said that during the present era of cut short competition and various stress, Yoga has emerged as best measure for relaxation of body and mind. He said that as many as 1327 groups were constituted under the Ayush Ghar Dwar programme through which over 53000 people were motivated to practice Yoga and pranayam.

Founder of Art of Living Shri Shri Ravi Shankar appreciated the steps taken by the State Government in promoting Yoga in the State. He said that Yoga not only helps in making the strong and healthy society but also in promoting goodwill among the masses. He said that Himachal Pradesh was an abode of god and goddess and steps must be taken to make Himachal Pradesh a prosperous and healthy State. The State Government had also done exceptionally well in vaccination campaign. He also thanked the doctors and other paramedical staff and frontline workers for working with dedication during the corona pandemic.