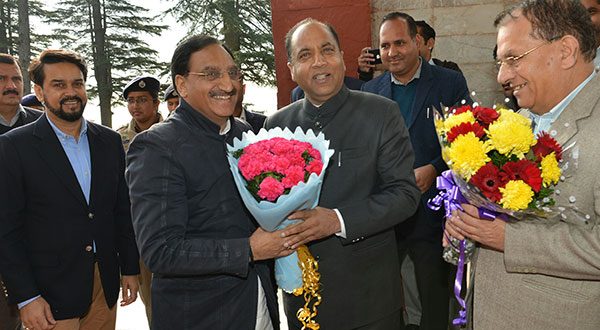 Youth of country have a major role to play in the vision of New India: Union HRD Minister

Youth of country have a major role to play in the vision of New India: Union HRD Minister

Aim of education should be gain of knowledge along with character building: Governor

Himachal Pradesh will become ‘Education Hub’ of the country:CM

As many as 448 Degrees and Gold Medals were awarded on the occasion to meritorious students, out of which 276 were females and 172 males. On the occasion, Vivek Kumar was awarded D.Litt Degree, whereas Afghan national Mohammad Sharif Shaheen was also awarded gold medal in Public Administration. 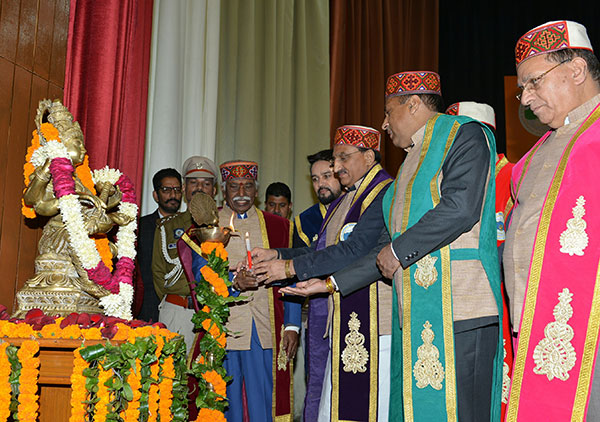 In his address, Union Minister said that India was known as the ‘Vishwa Guru’ across the world since time immemorial due to knowledge and wisdom. He said India believe in universal brotherhood and peaceful co-existence. He said the challenges in life become opportunities for those who accept them. He said that with launch of schemes such as ‘Make in India’, Skill India, Start-Up etc., there were ample employment and self employment opportunities to the youth of the country.

He also congratulated the medal recipients and wished them prosperous and bright future. He said youth of the country have a major role to play in the vision of ‘New India’ and urged the students to work with dedication to make India a five trillion economy in the next few years. He said that Union Government was coming up with new education policy to strengthen education system in the country and make education employment oriented.

Governor Bandaru Dattatraya said that the aim of education should be gain of knowledge along with character building.  He called upon the students to develop skills along with higher education, which would help getting employment. 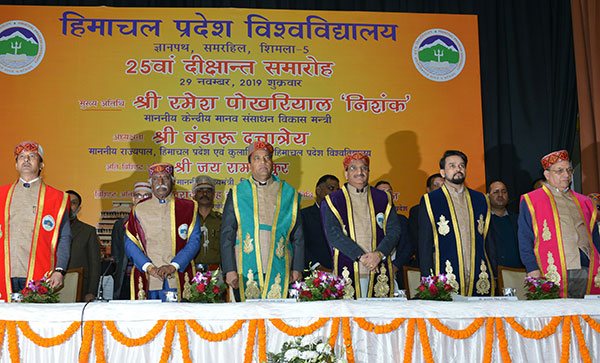 The Governor said that today, girls were excelling in every sphere of life. In most of the educational institutions, girls outnumber boys in the medals tally and said that it was a positive sign that the society was changing. He said that 124 gold medals were also awarded today in Himachal Pradesh University, out of which 87 gold medals were in the name of girls. Similarly, 189 girls were awarded PhD degree out of the total 323 students and a total of 448 degrees and medals were awarded today, of which 276 were girls. He congratulated the girl students for this achievement.

He said that students were the foundation of youth power of any country and added that India was fortunate that it has the highest youth power in the world today. He said we have a new world in front of us, a world full of possibilities and our youth power has the ability to get these opportunities. He hoped that the youth would take advantage of these opportunities to face various challenges and contribute in establishing India as a superpower.

Chief Minister Jai Ram Thakur said that the State Government was committed to provide quality education to students of the State by strengthening the existing infrastructure. He said that the motto of the Government was to make Himachal Pradesh an ‘Education Hub’ of the country. He said that recently Himachal Pradesh was awarded as the Best State amongst Big States category in Education and Health sectors in the country in a survey conducted by a prestigious news magazine ‘India Today’. He said that the award to State would further motivate the Government to work with greater dedication and commitment in the field of education. 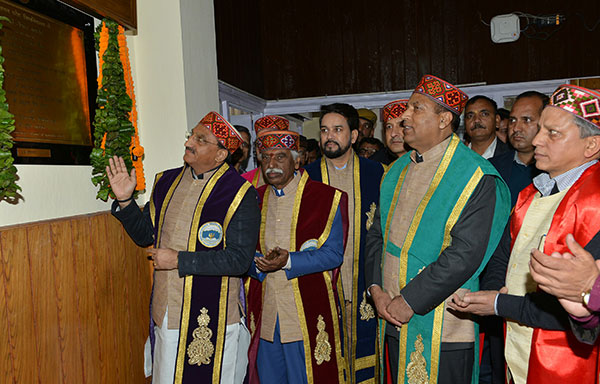 Chief Minister said that convocation was indeed a memorable moment in the life of students as they get reward for their hard work and dedication. He said that the students on this occasion should also remember and pay respect to their teachers, parents and family members for their continuous support for making this moment a reality. He also appreciated achievements of girl students as out of the total 448 degrees and gold medals awarded today, 276 were awarded to girls.

Chief Minister wished the degree and gold medal winners a very eventful and bright future. He said that the HP University was emerging as the premier educational institute not only in the State but also in the entire northern India. 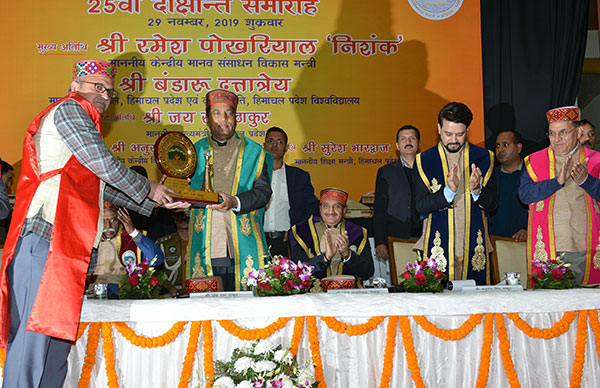 Union Minister of State for Finance and Corporate Affairs Anurag Singh Thakur, while congratulating the gold medal winners, said that youth of our nation were the biggest strength of India. He said that every possible support would be provided to strengthen the University. He said that as many as 37.70 crore new bank accounts were opened by the Union Government during the last three years. He said that it has ensured digital payments. He also appreciated the efforts of the State Government for launching new schemes for welfare of people and development of the State. He also gave a clarion call to the students to come forward to make India a world power.

Education Minister Suresh Bhardwaj said that the budget for the HP University has been increased to Rs. 130 crore which shows the commitment of the State Government to strengthen the University. He said that New Education Policy being finalised by the Union Government will help India to regain its old glory as ‘Vishwa Guru’. He expressed hope that the University would continue to excel in the field of education, research and sports.

Vice Chancellor Himachal Pradesh University Prof. Sikander Kumar welcomed the Union HRD Minister, Governor, Chief Minister, Union Minister of State for Finance and Corporate Affairs, Education Minister and other dignitaries present on the occasion. He said that it was a historic day for Himachal Pradesh University as Union Human Resource Development Minister was the Chief Guest on the occasion of the 25th Convocation Ceremony. He also detailed brief history of the University. 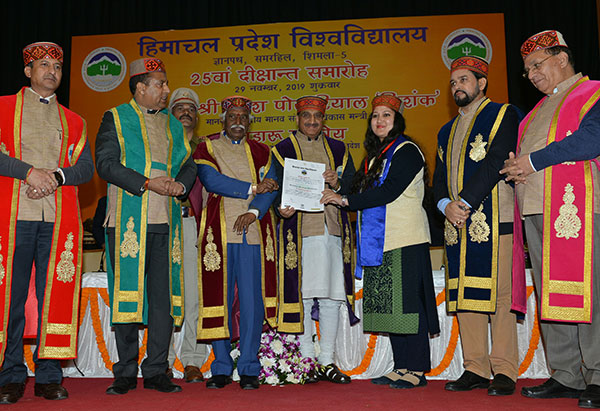 The Convocation started with entry of an academic procession.

Previous: CS directs HPSPCB to regularly check quality of rivers through Continuous Water Quality Monitoring Station
Next: Governor asks officers to work in field and sensitize people on welfare schemesGovernor asks officers to work in field and sensitize people on welfare schemes Governor Bandaru Dattatraya on his visit to district Hamirpur, had a meeting with officers of District Administration at circuit house, Hamirpur today Deputy Commissioner Harikesh Meena welcomed the Governor and detailed him about various projects, schemes, and programmes being executed in the district. He also apprised the Governor of the status of welfare oriented schemes of the state government and other flagship programmes of central government. On the occasion, senior officers of different departments also apprised the Governor of the activities and achievements related to their departments. The Governor said that the purpose of this interaction was to know about the targets, difficulties and other issues related to various schemes in the district. He asked the Education Department about the ‘Fit India Programme’ and ‘Swachh Bharat Abhiyan’. He expressed satisfaction that every sub-division of the district has playground facility. He said that education was the most important indicator of development and added that it was matter of satisfaction that district Hamirpur has the highest literary rate in the state. He asked officers of the Education Department to submit detailed breakup of enrolment of students in government schools. Dattatraya asked officers to work in the field and focus on new agri policy, new education policy, water policy, and sensitize rural people about welfare oriented programmes of the government. The Governor appreciated the Health Department for performing well in ‘Ayushman Bharat’ and ‘Him Care’ schemes and said that institutional delivery rate was very high in the district as compared to other districts which were 3390 out of 3398 during this financial year. He asked officers of Agriculture Department to focus on awareness programmes in natural farming and appreciated the initiative in Crop Insurance scheme under which 17906 farmers were covered during this year. He also took stock of Skill Development Programme. As many as 105 training centres were being run in the district out of which 36 were in government sector. More than 24000 students have been benefitted from these centres. He asked the officers to focus more on placement of students and impart training in those trades which were in high demand. He also expressed happiness that all villages in the district were connected with roads. He asked the officers to work more dedicatedly in implementing welfare schemes so that maximum people could be benefitted.